Over the past couple of years, I have watched a lot of indie ‘mumblecore’ fayre. Mumblecore itself is arguably a pejorative term, and a label that the filmmakers themselves would not necessarily favour. Most films that do appear to fall under that banner are woven together by common thematic and stylistic threads. They are typified by loose plots, minimal camerawork and deal with the minutiae of daily life: slackerdom, 20/30 something ennui, navigating social norms and responsibilities. So far, so familiar, but it recently dawned on me that there is something more exciting happening beneath the scruffy surface.

A crop of indie films are projecting feminist discourse on to cinema screens, and they are doing so with stealth and humour. Films like Young Adult, Frances Ha, Tiny Furniture all feature female protagonists who are complex, flawed, not necessarily always likeable but certainly relatable. They are also presented in the kind of nuanced way that ‘troubled’ leading women are so often short changed by in mainstream filmmaking.

In all three of the aforementioned films, the women are given the space to make mistakes and choices that aren’t necessarily great for them or those around them. Even acknowledging that such women exist is a step in the right direction.

Feminism is becoming more apparent and overt in great writing. I am thinking three films in particular: Obvious Child, In A World and Happy Christmas.

Perhaps the most daring of all is Gillian Robespierre’s debut feature, Obvious Child which is a romantic comedy where abortion is at the heart of the story. In one scene, Donna (Jenny Slate) is listening to her flatmate, Nellie (played by Gabi Hoffman) angrily talk about how “We already live in a patriarchal society where a bunch of old white men in weird robes legislate over what we should do with our c**ts ”. That kind of writing is refreshing, bold and honest and very funny. And let’s face it, how many rom-coms actually come out and take shot at the patriarchy? Answer: not enough.

But beyond that, Obvious Child takes hold of subject that is divisive, especially in the US where the film is set, and deals with it head on. It fully understands the weight of the subject matter but treats it with the kind of humour that doesn’t ask us to judge or pity Donna. One of the toughest scenes for me was Donna’s pre-abortion appointment, during which she is asked if she has health insurance. It saddened and angered me that young women might be forced to bear a child because their finances didn’t allow them decide for themselves. It was a message that rang loud and just as clearly when woven with straight-up gags as it would have been in a social realism context.

In A World, written by and starring Lake Bell is a film not without its flaws. It treads some well worn media industry in-jokes and films about the making of films are becoming a prominent feature of the indie world. However, I can forgive its occasional lapses into cliché because of two things: Lake Bell is ace and the central message is pretty right-on. Essentially, Lake Bell’s character is trying to prove herself ‘in a world’ where everyone she encounters including her own father makes it clear is man’s one. On paper the risks at stake (going for the opportunity to score the voice-over for Hunger Games pastiche The Amazon Games Quadrilogy) seem fairly trivial. But an excellent cameo by Gina Davies makes the real point clear in a delightful home run (nod to fans of A League of Their Own, couldn’t resist). It is also an exercise in delivering gender politics in a way that entertains, and makes important statements but doesn’t preach. I can definitely go for that.

In A World, image from Sundance

Joe Swanberg’s Happy Christmas is a semi improvised, lo- fi tragic comedy that on the surface meanders in a fairly indie-by-numbers way. It was so super-low budget that it was shot in the director’s home and the cast wore their own clothes and makeup. It tells the tale of 27 year old Jenny, reeling from a break up and hiding from reality in her big brother’s basement. What really struck a chord with me was a neat little sub-plot. This allowed three female characters (played by Anna Kendrick, Melanie Lynskey and Lena Dunham) to deconstruct erotic fiction and the relationship women have with their own sexuality. Well played, Swanberg and co, well played indeed. Smaller-scale films are creating a platform for telling stories through a feminist lens. The revolution may not be televised, but it just might be coming to a cinema near you. 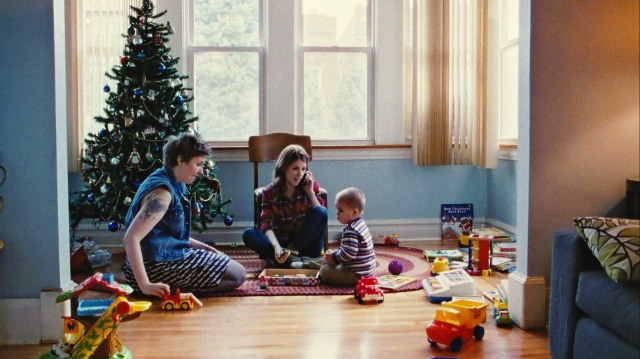 Becky is a writer and digital content producer from London.  She writes about music at www.kidvinyl.co.uk and loves to bang on about pop culture in general.  She writes as part of the Kaylosia comedy collective and has written and directed her first short film Double Word Score, which is a date film for two people who aren’t really sure if they’re on one.  She’s especially fond of vinyl, Kate Bush, Prince, Pixies, red lipstick, Wes Anderson films, Chris Morris, Lena Dunham, Bruce Lee, Bill Murray, noodles, hula-hooping, Hampstead Heath, independent cinemas and puns.  Read more from Becky at www.becky-matthews.com

5 thoughts on “Mumblecore: Whispers of a feminist revolution?”